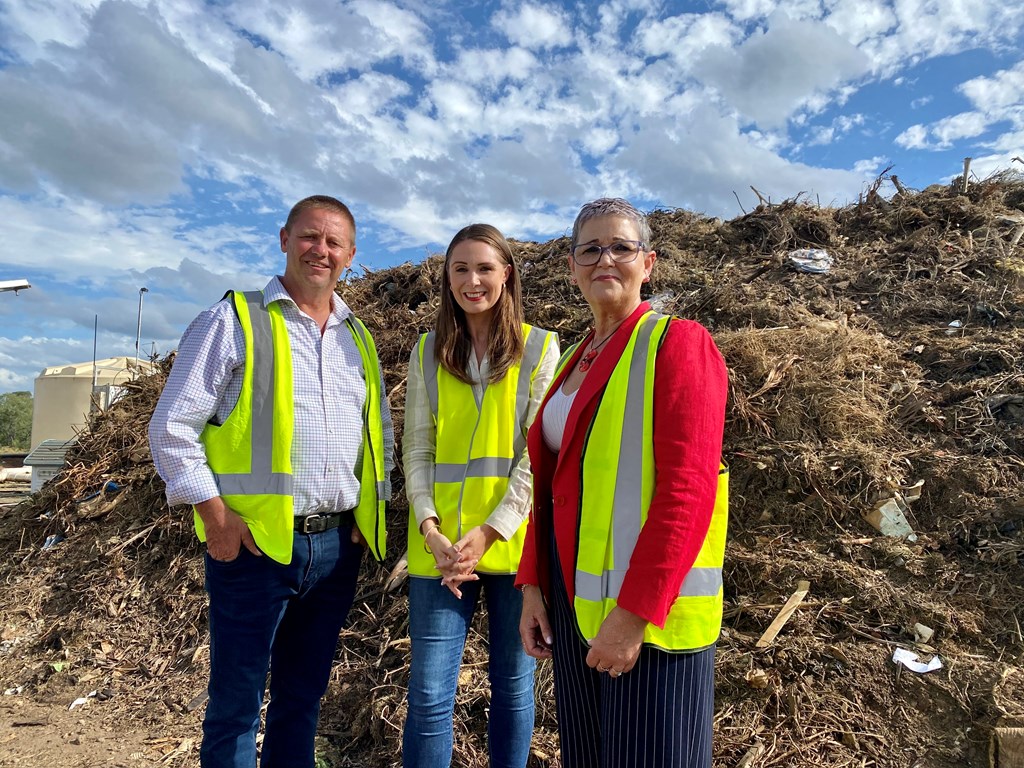 More than 400 tonnes of organic waste has been diverted from landfill in a kerbside collection trial of food and garden organics by the Palaszczuk Government and Lockyer Valley Regional Council.

Environment Minister Meaghan Scanlon visited the region this week and said the Palaszczuk Government had provided $320,000 for council to rollout more than 1,000 green bins across the community and test collection frequency, infrastructure types and community engagement methods.

“We want to see 80 per cent of waste in Queensland recovered by 2030. That’s why we partnered with Lockyer Valley Regional Council to trial FOGO and have now create a record $1.1 billion Recycling and Jobs Fund to drive sustainability,” Minister Scanlon said.

The Lockyer Valley was one of three Queensland regions chosen to participate alongside Townsville and Rockhampton.

“In the Lockyer Valley, council not only rolled out 1,000 green waste bins, they established their own temporary composting facility, using forced aeration technology, at the council-owned landfill site.

“During the trial, the council diverted hundreds of tonnes of food and organic waste from landfill and turned it into soil conditioner, which were used at community recreational facilities to keep the region’s public spaces and gardens healthy.

The Palaszczuk Government has now committed an additional $33,000 to the council to conduct bin audits to assess the effectiveness of the trial methodology.

“This is equal to driving more than three million kilometres or 208 laps around Australia, and is a testament to the initiatives taken by LVRC to ensure the region and the environment benefitted as much as possible from the trial,” Minister Scanlon said.

Singing the praises of State Government funding, Lockyer Valley Regional Council Mayor Tanya Milligan said the $320,000 grant had allowed the region to keep the momentum going in their bold commitment to shaping the future of their region.

“Thanks to Queensland Government funding, hundreds of local households in the Lockyer Valley have been turning food trash into treasure by converting community waste into a nutrient resource,” Mayor Milligan said.

“In an astounding example of ‘you reap what you sow’, this trial has helped our community divert 400 tonnes of compostable waste from landfill – the equivalent weight of 77 elephants.”

The only Council in the FOGO trials to use a static aerated composting system and process the material themselves, Mayor Milligan said the council had generated an end user product that has been used as a soil conditioner in local spaces.

“Local childcare centres, schools and community groups have been enjoying the fruits of our resident’s labour, with this product being used on community gardens.

“Our Environment team have also been giving native tree saplings the best start to life by spreading nutrient-rich FOGO compost on the garden beds – yet another example of the fantastic benefits recycling and reusing waste brings to the community.

“Through the FOGO initiative, we’ve flipped the lens with our community – changing from an awareness focus to behaviour change, and FOGO gives residents the chance to see the tangible impacts of their hard work.”