Cash lure on the line in Fish’n’SIP$ competition 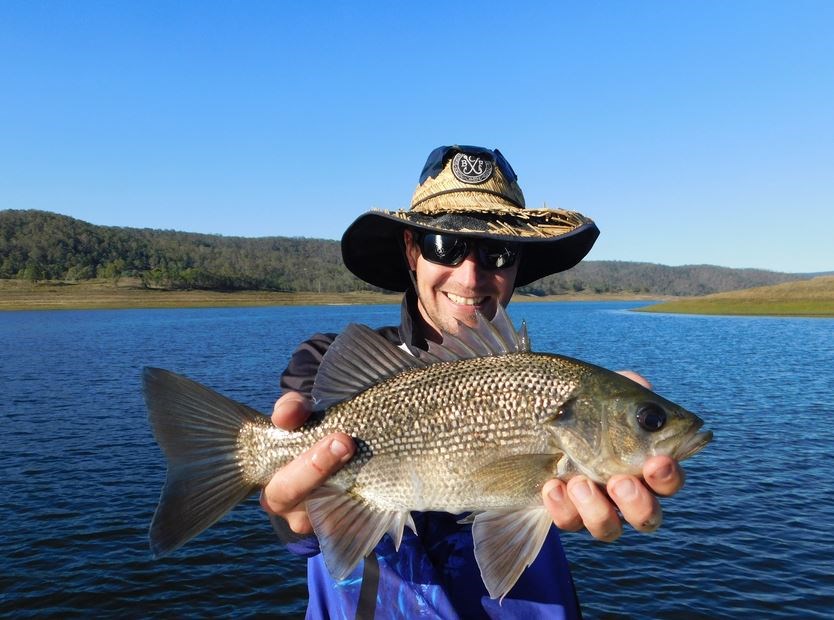 An Australian Bass caught in one of the 63 impoundments in Queensland’s Stocked Impoundment Permit Scheme. Credit: Department of Agriculture and Fisheries.

Recreational fishers in parts of regional Queensland now have a cash lure to wet a line in five of the State’s favourite stocked impoundments.

“Thanks to the efforts of the Freshwater Fishing and Stocking Association of Queensland Inc, fishers can cast their lines and try their luck in the inaugural Fish’n’SIP$ competition for a good feed that will also net a cash bonus in time for Christmas,” Mr Furner said.

“A total of 100 legal-sized fish, including barramundi and bass, have been tagged and released in the five participating impoundments in the Wide-Bay Burnett, Central and North Queensland regions.

“Lake Tinaroo, Lake Proserpine, Kinchant Dam, Lake Callide, and Lake Cania are each breaming with 20 tagged fish that could be worth from $1000 to $20,000.

“The first fifteen fish caught on a line and accurately reported to InfoFish will win a prize and the sooner you catch a tagged fish, the larger the prize will be.”

Mr Furner said the only catch was that fishers need to purchase a SIPS permit to tackle the five impoundments involved in the Fish’n’SIP$ competition.

“Revenue from SIPS permits supports our volunteer partners in the program to stock impoundments with native fish species including golden perch, Australian bass, and barramundi specifically for recreational fishing.

“Fishing in Queensland’s 63 SIPS impoundments, which require a permit to fish with a line, also gives the economy an annual boost of approximately $100 million, with at least a quarter of that amount spent directly in regional economies.

“I encourage recreational fishers to get a SIPS permit which you can access on-line and hook into this exciting new tagged fishing competition.”

SIPS permits are available for purchase online, through the QLD Fishing 2.0 smartphone app, at 585 Australia Post outlets throughout Queensland and northern New South Wales or by phoning 1300 575 359.

Visit qld.gov.au/recreation/activities/boating-fishing/rec-fishing/dams to find the nearest stocked waterway and buy a permit, or call 13 25 23 for more information.

Image – Please credit the Department of Agriculture and Fisheries.

An Australian Bass caught in one of the 63 impoundments in Queensland’s Stocked Impoundment Permit Scheme.