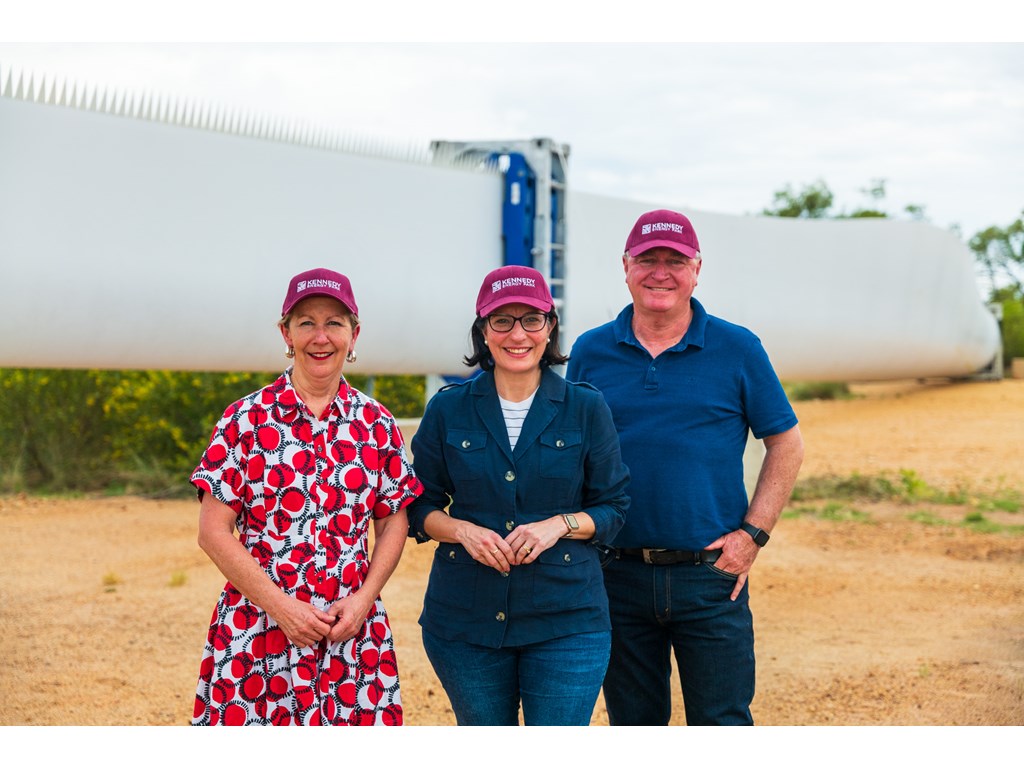 The final stage of testing and commissioning of an Australian-first hybrid renewable energy project in North Queensland is underway.

As part of this week’s Regional Community Forum in Hughenden, MPs and a group of North Queensland locals toured the Australian-first Kennedy Energy Park.

Minister for Energy, Hydrogen and Renewables Mick de Brenni said renewable energy projects like this are an important part of the pipeline that will deliver more jobs in more industries for North Queensland.

“Townsville’s businesses are lining up for clean energy to continue to sell products to the world,” Minister de Brenni said.

“Renewable projects like this will help us to secure the heavy industry of Townsville today and enable its continued growth into the future.

“And, we’ll make our power here in North Queensland  - not rely on overseas oil and international markets affected by foreign wars,” he said.

Minister for Employment and Small Business Di Farmer congratulated joint owners Windlab and Eurus Energy on the project, which is in the final testing and commissioning phase and is expected to begin commercial operations early next year.

“The $160 million Kennedy Energy Park is part of a wave of renewable energy investment in North Queensland that has occurred under the Palaszczuk Government,” Minister Farmer said.

“Our planned SuperGrid will unlock even more renewables in the region by strengthening the Hughenden to Townsville connection with a high-voltage transmission line that can move larger volumes of energy.”

“There were about 170 good jobs supported during construction of the Kennedy Energy.”

Minister Farmer said the Palaszczuk Government would continue to back the renewable energy sector.

“The Queensland Energy and Jobs Plan will drive investment in the renewable energy sector and support good jobs throughout the state,” Minister Farmer said.

Member for Mundingburra Les Walker said it was fantastic to see private investment into renewable energy.

“We know there are fantastic opportunities for wind, solar, batteries and hydrogen in North Queensland,” Mr Walker said.

“Projects like the Kennedy Energy Park help create good jobs and will help Townsville and the region grow in the future.”

“This will help decarbonise our frontline services like schools, hospitals and emergency services,” Ms Mullins said.”

“The energy transformation will drive investment and new opportunities into regional areas, with 70 per cent of future clean energy jobs expected to be in regional Queensland,” Ms Farmer said.

“The Palaszczuk Government is making sure renewable energy development occurs in a coordinated way through our Queensland Renewable Energy Zones.”

The Kennedy Energy Park – which combines 43 megawatts (MW) of wind, 15 MW of solar and a
2 MW/4MWh battery – is the first to combine all three technologies at this scale in Australia’s National Electricity Market.

Developed by leading renewable energy company Windlab, the Kennedy Energy Park leverages the complementary nature of the region’s solar and wind resources to deliver renewable energy around the clock.

CS Energy’s offtake agreement with Windlab includes 100 per cent of the output of Kennedy Energy Park.

CS Energy CEO Andrew Bills said CS Energy was proud to support its large commercial and industrial customers, such as the Queensland Government, in adding renewable energy to their loads.

“We have added more than 300 megawatts of contracted renewable energy to our portfolio in recent years, including the nearby Hughenden Solar Farm owned by BayWa r.e. Australia,” Mr Bills said.

“We continue to explore further opportunities in response to strong interest from our customers and are investing in new energy assets including grid-scale batteries and renewable hydrogen,”

Windlab CEO John Martin said Kennedy Energy Park is an important early step in the company’s ambition to deliver 20 per cent of Australia’s new green energy generation over the next ten years.

“The enormous renewable energy potential of Hughenden and the Flinders Shire means this region is a strategically critical part of our development strategy,” Mr Martin said.

“Windlab’s decade-long presence in the Hughenden region and the partnerships we have built over that time mean we’re uniquely positioned to make the most of this exciting opportunity to unlock the region’s potential, delivering benefits we can all share.

“We look forward to working with the Queensland Government to support the implementation of the Queensland Energy and Jobs Plan, which will be key to placing downward pressure on energy costs, and achieving our state, national and global decarbonisation commitments.”