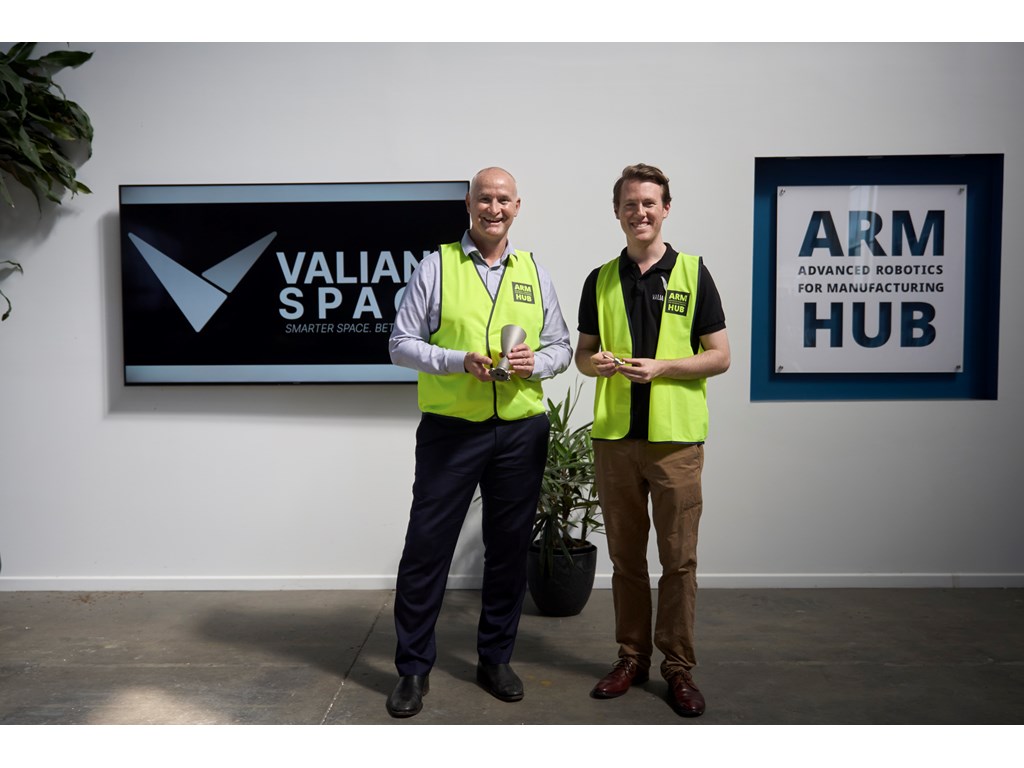 Brisbane start-up company Valiant Space, which has been supported by the Queensland Government’s Advanced Robotics for Manufacturing (ARM) Hub, is sending locally-made components into orbit, onboard SpaceX, from the Kennedy Space Center at Cape Canaveral.

Minster for Regional Development and Manufacturing Glenn Butcher said the components going into space were a first for an Australian company.

“The Palaszczuk Government will always support good jobs in Queensland and these young guns - space guns, if you will, are tapping into amazing opportunities, with the help from our ARM Hub and funding support,” Mr Butcher said.

“Our Government provides support in many ways and in this instance, the Queensland Government-funded ARM Hub, at Northgate, helped these young entrepreneurs out by providing a workspace to start this fantastic business, as well as assistance in applying for the critical grants that have made this SpaceX opportunity a reality.

“The Valiant Space team is just one business based here at the hub in Northgate and I’m looking forward to seeing the fantastic advancements and products to come from this Palaszczuk Government initiative.

Valiant Space co-founder and CEO Andrew Uscinski, 24, said one of the challenges for new businesses in the space industry was the need to validate your product by successfully launching it into space.

The first step in this validation process will occur on a valve that is an integral part of Valiant’s thruster, which will be sent into orbit with SpaceX on board Australian space services company Skykraft’s rideshare service.

Once the valve demonstrates it can survive a violent launch, 6-G gravitational force, extreme vibrations, and a wide range of temperatures on its journey into space, Valiant Space’s full thruster will be launched on a subsequent orbital mission in mid-2023.

Valiant’s young team of three, Mr Uscinski, fellow co-founder and Chief Technical Officer, Michael Douw, and lead engineer Benjamin Dodd, are mechanical and aerospace engineers who met at the University of Queensland and started their company while they were students.

The Valiant team identified a gap in the market for space propulsion options that used non-toxic propellants.

“Existing options are made from very carcinogenic and difficult-to-handle chemicals which makes them very expensive because of all the development costs,” Mr Uscinski said.

“Our thruster runs on nitrous oxide and propane – like what you would use in a barbecue, but slightly more pure – which gives a comparable performance to the toxic options, but without the need for high-cost handling infrastructure.

“Our solutions will save money at every step of the mission lifecycle, by leveraging a simplified design, rapid manufacturing methods and low-cost propellants.”

The thruster is mounted on the spacecraft to provide the main propulsion system for the satellite and enables companies to perform fast-acting orbit raising and collision avoidance manoeuvres.

“It means satellites can come online quickly, and they stay in their optimal orbit and last longer in space,” Mr Uscinski said.

The Valiant Space team started their operation at the Advanced Robotics for Manufacturing (ARM) Hub workshop in Northgate, Brisbane.

“We were one of their first ARM Hub tenants in November 2020,” Mr Uscinski said.

“ARM Hub offered us flexibility in leasing, which is fantastic for start-ups, and they have such a large warehouse that has allowed us to expand out as needed.

“The staff at ARM Hub have helped enormously by identifying funding opportunities and helping us write our first successful Moon to Mars grant.

“They’ve also helped us gain exposure to a variety of people, including potential investors and Ministers and MPs.”

The team previously won a Moon to Mars Initiative demonstrator feasibility grant in 2021, to mature their non-toxic thruster technology.

“The first grant helped us to prototype and test our product, which has been instrumental in gaining market traction and momentum,” Mr Uscinski said.

“With this second grant, we will be getting flight validation on our product, build the supply chain, and upscale our propulsion technologies to domestic and international customers.”

The thrusters are 3D printed and almost entirely Australian made.