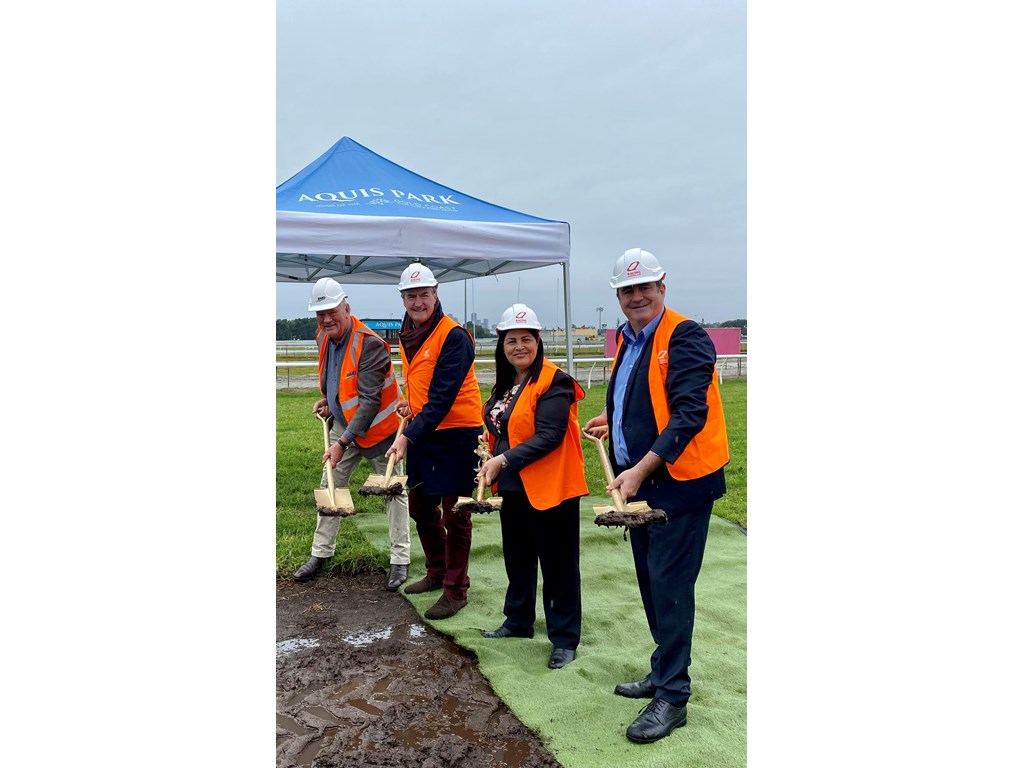 A bigger and better redevelopment will put the Gold Coast Turf Club in the winners’ circle, with Racing Minister Grace Grace turning the sod on the multi-million dollar works today.

State-of-the-art broadcast lighting for night racing, an all-weather synthetic track, refurbishment of racing surfaces, and an in-field tunnel to enhance equine welfare will be delivered as part of the project, bolstering Queensland’s status as a premiere racing destination.

Racing Minister Grace Grace said the project will be a boon for racing on the Gold Coast and create more good jobs for Queenslanders.

“This project will deliver fantastic opportunities for racing on the Gold Coast with the creation of night racing timeslots, better infrastructure and enhanced training amenities,” Ms Grace said.

“328 jobs are expected to be created during construction, which will be completed in stages to ensure the impact on the Gold Coast Turf Club is minimised.

“This project will inject more than $100 million into the local economy and create brilliant commercial opportunities with more racing at a world-class facility.

“I have no doubt this facility will add to the great lifestyle that Queenslanders have here on the Gold Coast.

“BMD Group has been appointed to complete the overall works, while Martin Collins Australia has been awarded the contract to build the all-weather synthetic track, which is expected to be completed ahead of the 2023 Magic Millions Raceday.

“The installation of a second synthetic track in South East Queensland will also provide an important contingency plan for training and racing activities during periods of wet weather.”

Since the installation of the Sunshine Coast Turf Club synthetic track in December, 15 rescheduled meetings have proceeded, with almost $4 million in prize money and bonuses returned to industry participants.

The boosted scope of the project and significant impacts on construction costs due to international supply chain issues caused by the COVID-19 pandemic have contributed to a larger budget.

The in-field tunnel will be built wider and delivered faster as part of the increased project scope.

Major racing infrastructure projects will be supported well into the future by the Palaszczuk Government’s new sustainable funding model for Queensland racing.

“In June I announced changes to funding for racing in Queensland that now sees 80% of betting tax revenue going back into the industry, up from 35% in the previous agreement,” said Ms Grace.

“Along with a suite of other changes, these reforms will give Queensland racing clubs funding certainty, ensuring off-shore based betting companies are paying their fair share back into the industry.”

“The re-development of the course proper, the installation of an all-weather synthetic track and upgrade to the B Grass track will provide benefits for the entire industry,” Mr Wilson said.

“Importantly, the project will enable the Gold Coast Turf Club to become the fourth metropolitan standard thoroughbred track in Queensland.”

Following next year’s Magic Millions Raceday further works, including those on the new tunnel and the refurbishment of the Course Proper, will continue, scheduled to be completed prior to the 2024 Magic Millions.

“After many years of hard work, we are excited to commence this project which will deliver a world class racing facility, as well as a significant piece in the jigsaw that will future proof the Industry on the Gold Coast,” Mr Lines said.

“We greatly appreciate the investment and the time of many people and would specifically like to thank Minister Grace, all the team involved at Racing Queensland, and GCTC Chairman Brett Cook who has worked tirelessly with our team to make it happen.”

The first night races under lights at the Gold Coast Turf Club are expected to take place in early 2024.