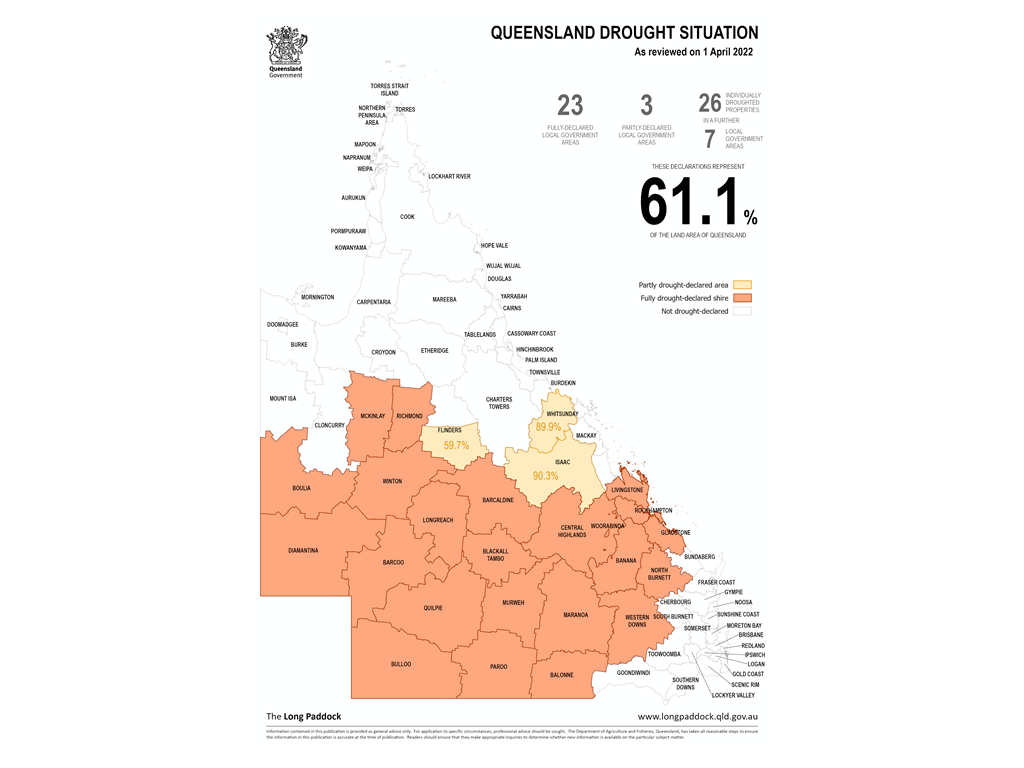 Significant rainfall since October 2021 means 11 South East Queensland local government areas are no longer in drought, with the state’s drought declared area dropping from 64.7% to 61.1%.

Minister for Agricultural Industry Development and Fisheries and Minister for Rural Communities Mark Furner said Local Drought Committees (LDCs) had assessed the response to the rain and flooding events over the past few months and noted a big improvement in conditions across the state’s south east.

“While we acknowledge that some producers have suffered significant damage from the severe rain and flood events, the positive is that natural water courses and stock and irrigation water storages have been replenished, along with excellent pasture growth that will see us through to the next wet season,” Mr Furner said.

The drought status of these LGAs is being revoked:

The Minister said individual properties could still be considered for drought assistance.

“If a producer is experiencing difficult conditions in an area that is not drought declared, then they could apply for an Individually Droughted Property (IDP) declaration,” he said.

“This gives them the same access to our drought assistance as an area declaration.”

The Minister said LDCs used a range of information and technologies when reviewing drought conditions.

“This includes the Australian Combined Drought Indicator (CDI), which was developed by the Northern Australia Climate Program with funding from University of Southern Queensland, the Queensland Government’s Drought and Climate Adaptation Program and Meat and Livestock Australia,” he said.

“Primary producers in the drought-revoked areas can now access freight subsidies for restocking and returning from agistment under the old Drought Relief Assistance Scheme (DRAS).

“Other Queensland’s LDCs will meet towards the end of this month to assess seasonal conditions in other drought declared parts of the state.

“Droughts and floods are part of our climate cycle and now is the time to start preparing for future droughts.”

For further information, visit daf.qld.gov.au or call the Customer Service Centre on 13 25 23.