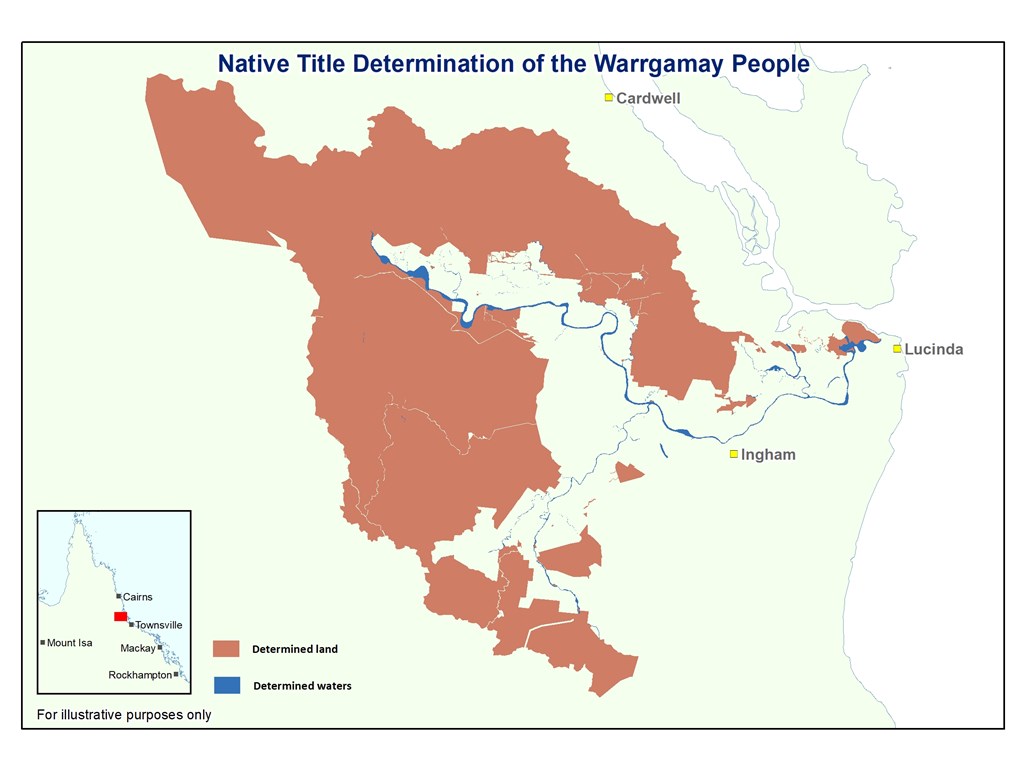 A map showing the native title determination of the Warrgamay People, encompassing 185,000 hectares of land and water near Ingham, Cardwell and Lucinda.

The Warrgamay People will hear a court decision today recognising what they have always known about their land in North Queensland.

Resources Minister Scott Stewart said the Federal Court will today recognise the Warrgamay People’s long-standing rights to more than 185,000 hectares of land and water at a virtual hearing.

“As native title holders, the Warrgamay People have cared for this country for many generations and today’s decision recognises their long and enduring connection to country,” he said.

“I congratulate the Warrgamay people, and everyone else involved, including the Cassowary Coast, Charters Towers, and Tablelands Regional Councils and Hinchinbrook Shire Council, for the spirit of co-operation required to achieve this outcome.”

Today’s decision covers an area from Lucinda on the coast, up to and along the Seaview Range and into Girringun National Park.

Among the traditional owners are former Kangaroo and Queensland rugby league State of Origin great Sam Backo, who now lives in Halifax.

“This always was, and always will be, Aboriginal land,” Mr Backo said.

“This determination will give us the opportunity to hopefully benefit not only traditionally and culturally but also economically from our country. “

“Australians will finally know that this is Warrgamay Country and who the people are: our names and that we belong to this country,” he said.

“It means that the Elders that aren’t here now; that their hard work has paid off and we know that they are with us and that they would be very happy.

“The future generations will know that our people fought for this recognition and they should be proud of it.”

“This means the Warrgamay people can hunt, fish, gather, conduct ceremonies, teach and maintain places of importance on country,” he said.

“The Palaszczuk Government continues to work with Indigenous Queenslanders to recognise their rights as traditional owners, with native title now recognised in nearly 30 per cent of our state.”