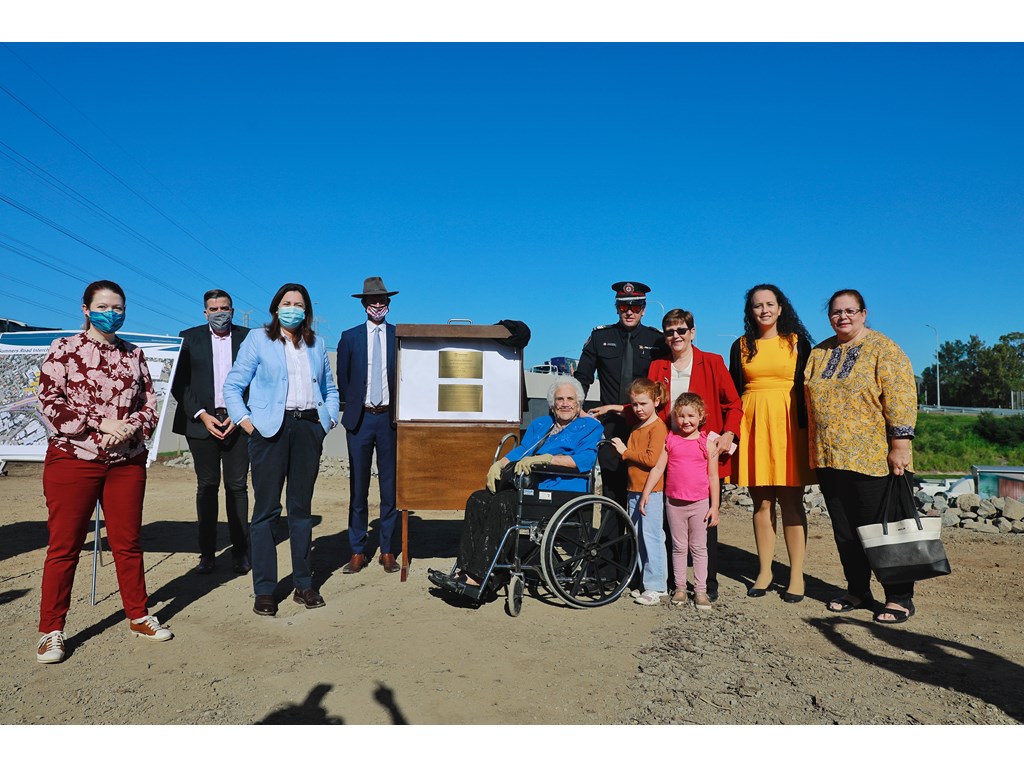 Premier Annastacia Palaszczuk, Member for Mount Ommaney Jess Pugh, Member for Oxley Milton Dick and Minister for Transport and Main Roads Mark Bailey with Gladys Waters and family at the naming of the Len Waters Overpass at the Sumners Road Interchange

The Palaszczuk Government has completed its $80 million overhaul of one of Brisbane’s busiest interchanges six months ahead of schedule, tackling congestion and supporting jobs through COVID-19.

“More than 35,000 people use this stretch of road every day, and more capacity on the interchange will make a world of difference for families in Jamboree Heights, Sumner, Sinnamon Park and Darra,” the Premier said.

“Projects like Sumners Road, the $400 million Ipswich Road Rocklea-to-Darra upgrade and the $244 million Centenary Bridge duplication, as well as $17.8 billion for regional roads and transport, are providing the infrastructure needed for our growing state and creating thousands of jobs.

“Overall we’re investing a record $26.9 billion over four years for better roads and transport as part our economic plan and ongoing response to COVID, at a time when Queensland is expected to lead the nation in population growth.

“I’m also very pleased to announce the project will be officially named the Len Waters Overpass, in honour of the first known Aboriginal person to serve as an RAAF fighter pilot in World War Two.

“Len raised his family in this area after the war, and his wife Gladys still lives nearby in Middle Park. It’s a fitting tribute and a mark of pride in the local community, especially in the lead up to Anzac Day.”

Minister for Transport and Main Roads Mark Bailey said the Sumners Road upgrade had supported 105 jobs during construction, with several local businesses also contracted to provide the 17,000 tonnes of asphalt, 6000 tonnes of concrete and 36 girders needed.

“Thanks to the advocacy of local MP Jess Pugh and her community, our government committed to building this upgrade after LNP ministers including David Crisafulli cut the project when they were in government,” Mr Bailey said.

“It’s a great example of how major road projects are benefitting not just drivers, but also bike riders and pedestrians.”

Member for Mount Ommaney Jess Pugh said she was excited to see the project delivered for the community, and grateful for their ongoing patience during construction.

“Thank you to all locals and the surrounding businesses who lobbied me for this upgrade. Now the interchange is completed, we are seeing much quicker commute times across the entire intersection making businesses easier and getting home quicker and safer,” Ms Pugh said.

“I’m also thrilled to be able deliver a project of this magnitude and pleased to name the new overpass in honour of Australia’s first indigenous fighter pilot in World War II and local identity, Len Waters.

“Len fought courageously for Australia, becoming an elite pilot of a Kittyhawk and receiving six medals for his dedicated war service – and it’s a privilege to be able to name this bridge in his honour.

Mr Waters was born in 1924 and enlisted in the Royal Australian Air Force at the age of 18, where he rose through the ranks from aircraft mechanic to a Sergeant pilot in less than two years.

Four weeks after his discharge from the Air Force, Mr Waters married his wife Gladys, with whom he raised six children.

"Prior to his passing in 1993, Len spent many years raising his family in Inala and his family now live right here in 4074,” Ms Pugh said.

"I’m delighted to have the support of his wife and six children, as well as local Traditional Owners and the RSL, so that Len Waters' name and legacy will live on for all those who pass through here to see.”

Space4Cycling Brisbane’s Chris Cox said the Sumners Road underpass is the most exciting upgrade to the Centenary Cycleway in years.

“Avoiding the detour will save minutes off a trip into the CBD, while the new shared path and bike lanes across the Centenary Motorway connect Darra and Jamboree Heights. This project empowers more people of all ages and abilities to get on their bikes, and leave their cars at home,” Mr Cox said.