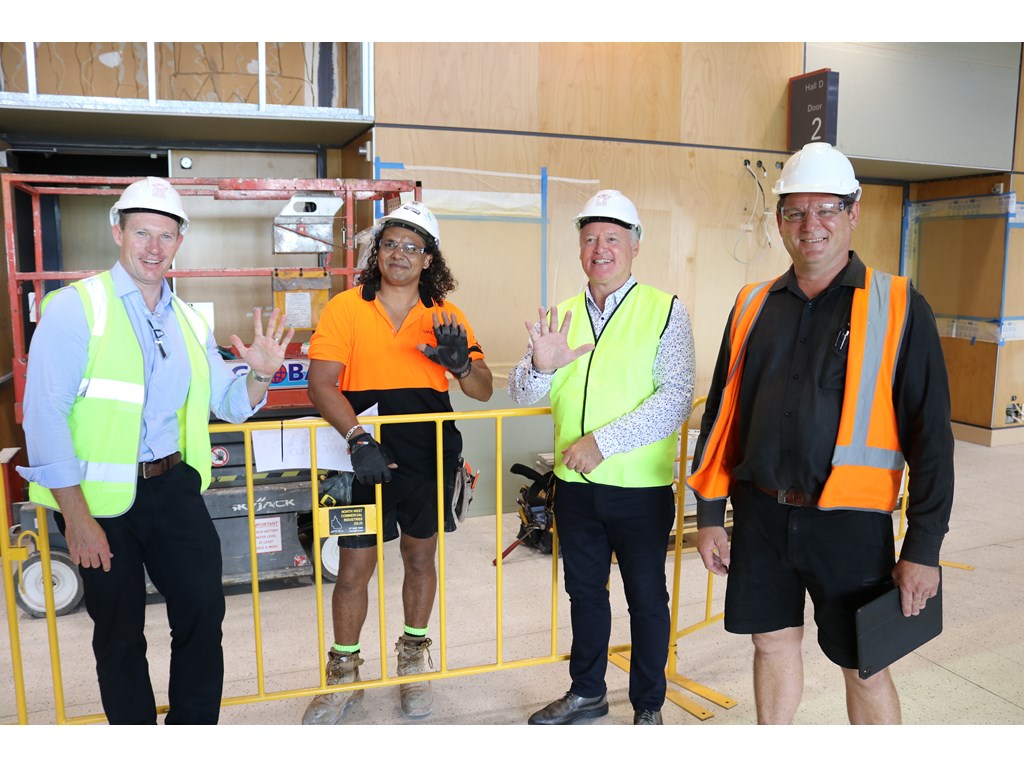 The Palaszczuk Government’s investment in the Cairns Convention Centre is delivering jobs in the Far North, with the 500th worker having been inducted onto the $176 million project.

Minister for Public Works and Procurement Mick de Brenni said the 500th induction on site was proof that the Palaszczuk Government’s investment in the project continued to play a key role in the economic recovery of the Far North.

“Thanks to the hard work of Queenslanders managing COVID-19, tradies working on the Cairns Convention Centre have been able to stay at work throughout the pandemic,” Mr de Brenni said.

“In the seven months since we started construction, 500 workers have so far helped shape the new and improved Convention Centre, with 87 per cent of those workers calling Cairns home.

“This is very much being built by locals, for locals.

NWCI Manager Scott Lohmann said the Convention Centre project has allowed their business to thrive during the pandemic.

“It has enabled our local NWCI branch to expand even through this year’s difficult times,” Mr Lohmann said.

“We have employed a number of apprentices and workers, like Issack, who is a tremendous asset to our Cairns business.

“We employ locally and we train locally, creating a capable team who will be able to deliver future projects for the region for years to come.”

Mr de Brenni said despite the challenges of 2020, the refurbishment was into the home stretch following significant progress on the roofing and civil earthworks.

“Today, it’s a hive of activity on site, with painting, piling and the installation of an impressive chiller system underway, to keep patrons ultra cool,” he said.

“The new year will see the arrival of retractable seating, the quality of which matches the Royal Albert Hall or Arsenal Football Club – putting Cairns in the best position to compete on the global stage for tourism events and recharge the local economy.

“Ongoing impacts of COVID-19, as well as some wild weather predicted for the summer, have led to a revised completion date of 31 March 2021 for the Centre upgrade.

“We will work with centre management to minimise this impact, while the Pop-Up Arena at Portsmith will continue to host major sporting events in the new year.”

Assistant Minister for Tourism and Member for Cairns Michael Healy said the redevelopment continues to deliver real value to the local economy.

“As of this month, 77 subcontracts worth $59.5 million have been awarded with 54 of those awarded to Cairns businesses,” Mr Healy said.

“A further 47 local suppliers have been engaged in the extended supply chain.

“The new-look Centre is expected to inject an extra $50 million each year into our local economy as well as provide local jobs in hospitality, logistics, security and maintenance.

“This will be a world-class events destination with the potential to draw an additional 20,000 visitors to the Far North each year.”